I’ve wanted to post a little about how I’m animating in Maya, but when I began to look at what I’d done I realised that there was more I wanted to say. So I’m beginning here, and we’ll see how it goes!

This is, by far, the most important thing I’ve learnt while I’ve been on the Aardman course. I knew about it before, but I didn’t really use it (somehow I thought it was cheating). While at VFS I became comfortable with using myself as an “instant” reference for mouth shapes, hands, etc. It was only once I’d left that I figured out how important looking at real life was – not for drawing things, but for understanding how things work.

Take cats. I know of cats, and I like them, but I’ve never owned one. I didn’t draw them lots growing up (I drew dogs and horses, mostly) but I figured that, as an artist, I must be able to magically draw them. Unfortunately that’s not how it works. Once I started looking at pictures of cats and drawing from them, and then drawing real cats I encountered, I finally began to understand how cats work. I’m still no expert, but my cat doodles look a whole lot better now.

Yet somehow I still expected my animation to come from that magical artistic place inside of me. Thankfully after nine weeks at Aardman I’m thinking differently. The following pictures are all pages from the notebook I keep on my desk, and I hope they’ll illustrate a little of what I’m trying to say. 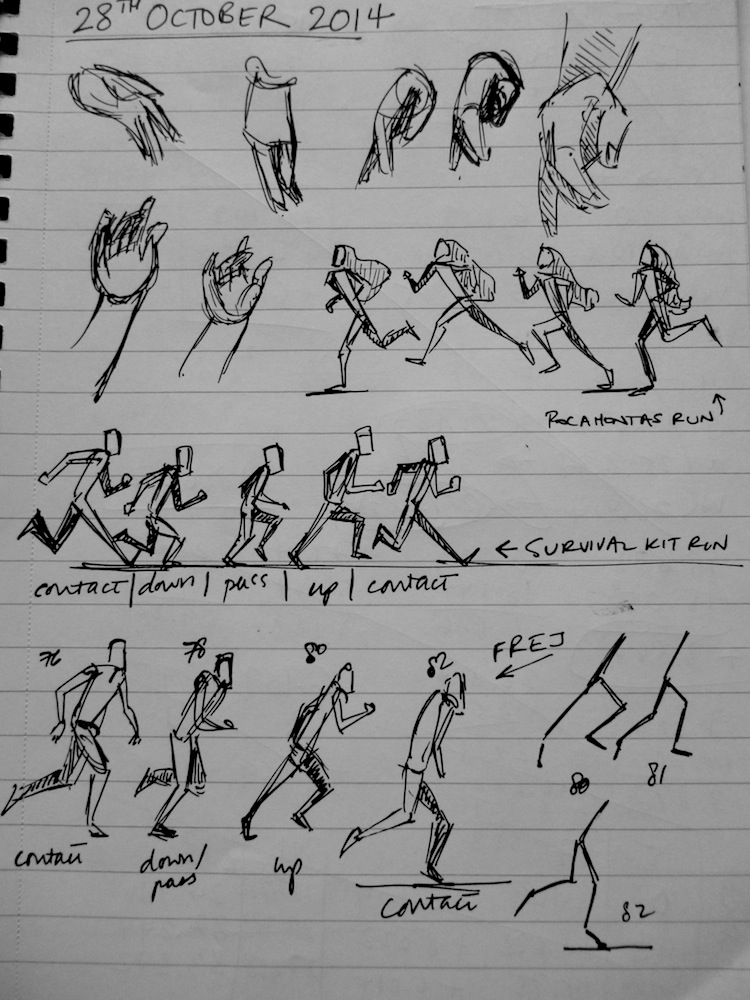 Referencing often begins with finding out what other people have done. On this page I have sketches from Richard Williams’ Animator’s Survival Kit and Pocahontas. Both great (and useful for learning how to break down the movement) but not necessarily 100% accurate or, indeed, showing what I want to accomplish with my run. 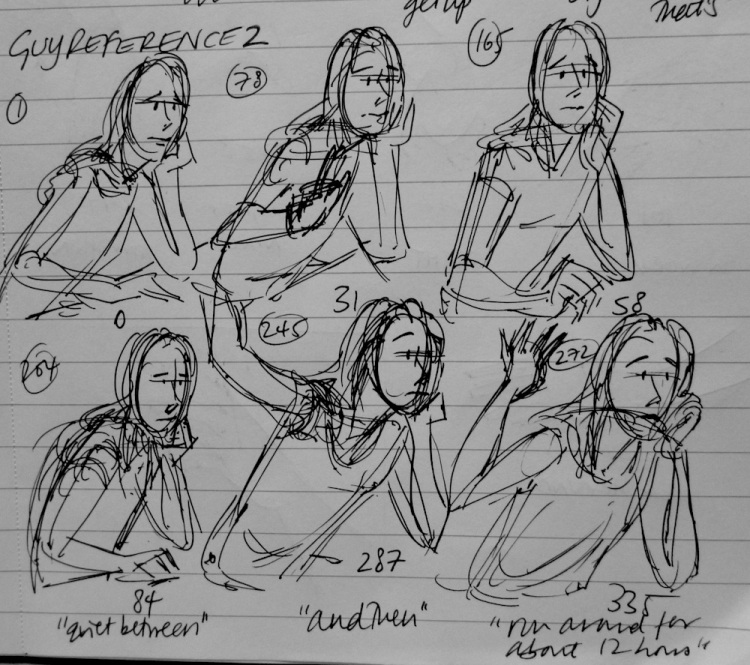 Referencing a specific piece of acting is a bit different. The drawings above come from a video I took of myself. It was quite easy to pick up the important poses – where my hand was raised to the highest point, when it settled back onto the desk, when I slumped into my hand – and sketch them out.

The numbers by the images refer to the frame number on the video. We’ve been using QuickTime Pro which has a timecode / frame number option.

With this I was working to a line of dialogue. I had a video of me talking and moving all over the place, so it was difficult to figure out what the key poses were. By stepping through the video and watching my movement I chose moments where my head and body hit the most extreme positions. On frame 107, when I said “seven”, I hit the bottom of my head and body movement; in the following frames they didn’t move any further down. So that became my third pose.

I normally do different levels of referencing depending on what it is I’m animating. For the piece I’m doing at the moment there are two characters, a lot of dialogue, and a lot of action. So I take it in stages. I used the body and head breakdown shown above to create the first poses. I wasn’t happy with the hand positions in the reference, so I used another video to draw new hands. These can be seen below.

The next stage is taking these drawings to animation. I hope to cover that in another post!