I first remember seeing Escher’s work while at primary school. We were given a piece of his to copy, so I dutifully started drawing some of the plants from the corner of his lithograph “Waterfall”. I ran out of time, and never finished anything else, but I did gain a love of his work.

Over the years I’ve seen bits and pieces of his art in books and on posters, but yesterday was the first time I got to see a real piece of his work. Currently the Scottish National Gallery of Modern Art is holding an exhibition called “The Amazing World of M.C. Escher” which has drawn work from throughout his life. I’d highly recommend it. Below I’ve shared some of my favourites from the collection. Click for larger images!

Despite being black and white, it gives the impression of somehow having more colour. Escher made thousands of tiny scratch marks to make it appear to glow. I love its apparent simplicity.

This picture was not in the exhibition, but was in the catalogue. I had to include it because it’s such a good representation of what it’s actually like to be inside San Pietro in Rome. It also shows his early fascination with the perspective on a scene or place.

I like how cleverly this picture moves from desk to street: the illusion of reality.

I think that Escher must have sparked my interest in illusions. Seeing this piece in person was incredible. I went along trying to figure out where the breaks in the pattern are (it was printed from twenty separate blocks on three sheets of paper) and could not see anything. There is such a sense of movement. I have a flipbook of the middle part of the design which shows how the design is essentially an animation. Indeed, Escher thought so himself:

“I see it {Metamorphosis}, other than a childlike association-impulse, also as a surrogate for a film. Most of all, I’d like to express my metamorphosis and association-mania in an animated film, and strongly believe that the animated film will become an artistic expression of great value for the future, in which thoughts of greater importance will be shown than Snow White or Micky (however, I have absolutely no disdain for those products, on the contrary: admiration for Disney’s talent!). Still, I often dream of the film I would like to make. What an astonishing metamorphosis you would then behold … ” M.C. Escher, 1940

Other World, wood engraving and woodcut, 1947

This at first struck me as an image made with a computer! This is one of the first prints Escher made that explored how to show several perspectives on a scene at once. What’s so fascinating is his ability to make it look ordinary. 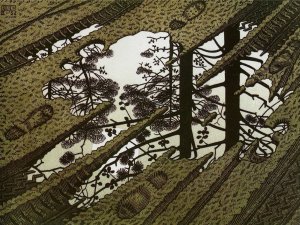 I’ve grouped these three together because I think they share many similarities. Though they show familiar things they are otherworldly.

Escher said of this piece: “The entire image is contained in a dark-blue circle, giving the impression of looking at the planet through a telescope.” I like the story at play here: the city-part with its buildings and people entwined with the forest-part with its vegetation and creatures. 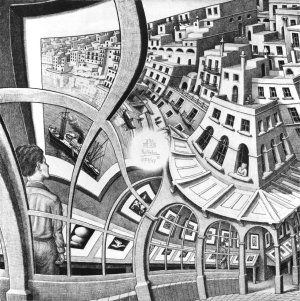 There is another story in this picture, with its never-ending loop. I love how it flows so well from place to place. 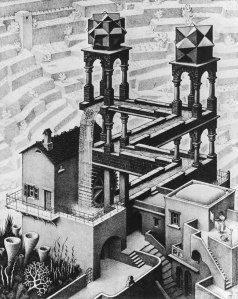 I think it’s appropriate to end where I began, with the first piece of Escher’s work I saw. Even now I still think “Well, perhaps it could work … “

You can find many of Escher’s prints, including much of his earlier work, online. I’d recommend doing so if you can’t make it to this exhibition: his early exploration of Art Nouveau and Cubism gradually gave way to something that has the appearance of Surrealism (though he never had contact with any surrealists) but has links to illusion, architecture, mathematics, and animation. I enjoyed seeing the development of his work, and appreciate the end results all the more.

Escher’s work still appeals to me now not just because it’s clever and highly skilled but because the illusions still trick me. As I’ve learnt more about filmmaking and animation I’ve found that I can see the “gaps” when watching films and television – particularly if the story or the characters don’t grab me. Perhaps that’s why partly Escher’s prints work so well; he creates a world, a story we can believe in.