Over the last few months I’ve been working on something really special – something a bit different from anything I’ve made before. Rachel Zylstra, a singer-songwriter based in Edinburgh, asked me to create a music video for one of the tracks on her new album On Faith.

You can watch the result below!

Liffey was the Irish Setter my family owned while I was growing up. She was a wonderful companion, if a little odd at times. I must have doodled these caricatures of her at some point last year, but I’d forgotten about them until now.

I made it along to some of the epic eight-hour life drawing marathon organised by Deryck Henley on New Year’s Eve. It was great to do some drawing from (digital) life – it had been a few months, and I was very rusty.

These poses were modelled by Anna and Mariano.

Five years ago I was in LA attending the CTN expo as part of an animation industry group from Scotland. Today, as part of CTN Live (sign up now if you haven’t already – it’s free!) we’re having a reunion to discuss the trip and where we are now.

It All Began 5 Years Ago: Scotland Animation Industry Reunion

The panel discussion is at 11am PST (7pm GMT) on Wednesday 18th November.

A recording may be available later – I’ll update this post with more information if so. View the schedule here to find out more!

Wild Life Drawing hosts live drawing sessions with animals in the UK. I sadly haven’t ever been able to go to any of their in-person classes, but I have now attended online!

Last week I joined in a Zoom drawing class featuring three wolf-dogs from Watermill Wolves. A lot of little mannerisms reminded me of my own dog, but I enjoyed studying and exaggerating the differences!

Last week, I attended a life drawing session where Safire and Andrew held beautiful poses. With three cameras to choose from, I enjoyed capturing the same pose from different angles.

Liquid Solid is now screening at DepicT! You can watch it in full here.

If you enjoy it please rate it out of five – your vote will count towards the DepicT! IMDbPro Audience Award.

Morna and Alistair are from a story I’ve been working at over the last few months. As they both get older in it I’ve been trying to find characters that work at different ages. These quick doodles I did after work are the first ones I feel capture their characters.

I’m thrilled to announce that my short animation Liquid Solid has been selected for Encounters Film Festival!

You can find out more about the film and the festival through the links above.

A couple of sketches of Naomi, from a session last month.

I’ve just started a new job with Wild Child on a children’s television series. Hopefully I’ll be able to show what I’m working on sometime next year!

John Mackey was completely in character at last week’s CTN Character Sketching session! It was great fun, and I came away with the desire to rewatch Pirates of the Caribbean …

My badger sketches have proved popular, so I’ve had some lovely A4 prints made! You can purchase them using the buttons below. 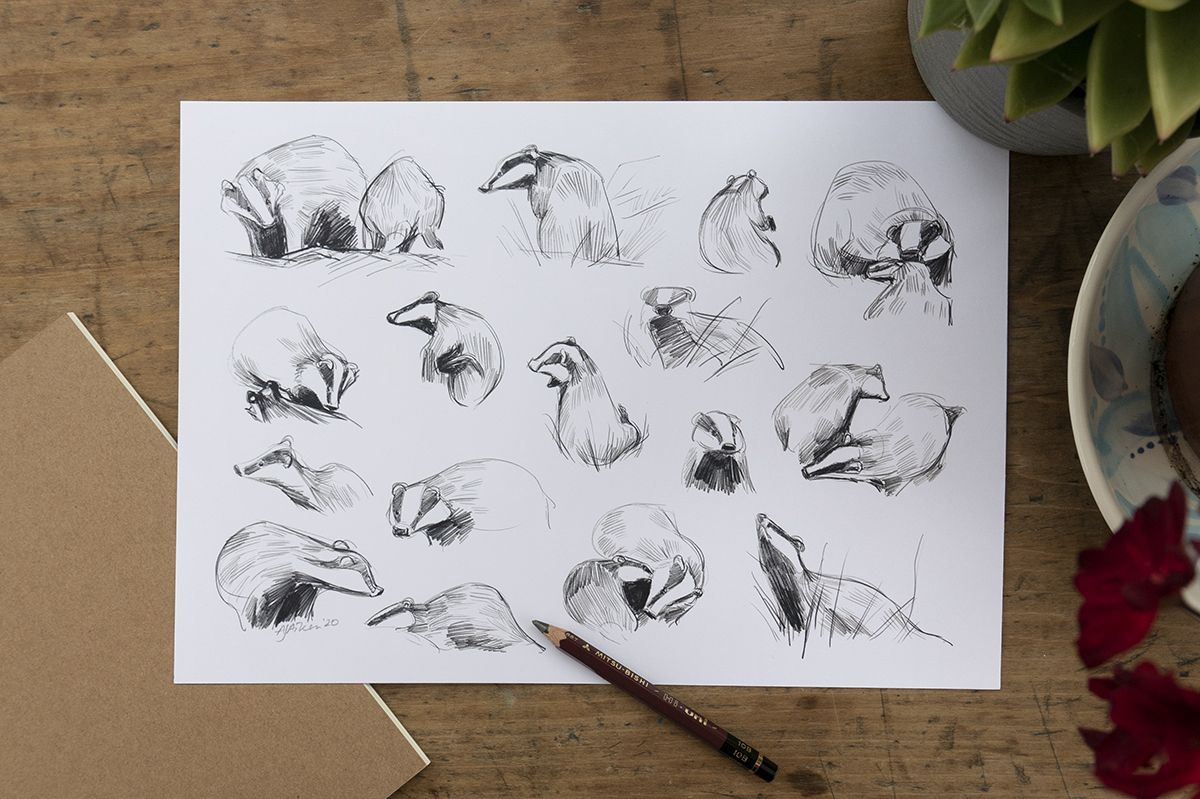 A4 Signed Badger Print – UK only

Julie Wions modelled at this Character Sketching event a couple of weeks ago. I loved the interaction with the doll – I was reminded of my sister and my niece at times!

It’s taken me far too long to post these sketches from this session where Daniella Traub modelled as a ‘fantasy creature’!

Through the evening I explored different versions of the character – more elfin, a wild girl of the woods, a villain.

Last week I was finally able to catch the free costumed drawing session CTN is running before it vanished from YouTube! As it’s a recording I was able to skip back and forward a bit as I pleased, so though poses were between two and seven minutes I spent less time on some and more time on others.

A few years ago I posted some images from a short story I’d written and illustrated. You can view them here if you didn’t see them the first time around!

The story follows Kinsey, a young Queen who battles her fears in order to reclaim her sword, her family, and her purpose.

Since then I’ve adapted the story into a script, in collaboration with Philip Todd of Fellowship Film, with the intention of producing an animated short. As part of that process I drew a thumbnail storyboard, some of which is below.

Drawing the thumbnails really helped me visualise the story in depth. I had been struggling to separate the script from the original story – it’s been a challenge to convey through notes in a script what’s described in a page of prose!

So what’s next? Right now, I’m drawing beat boards for the latest draft of the script. Following that we’ll start work on a trailer, so we’re on the lookout for artists, animators, and others who may like to get involved! Please let me know if you want to find out more – you can reach me at aj.aiken@yahoo.co.uk or through social media.

My sister and I were horse mad when we were younger, with model horses, multiple books, and notebooks filled with pony sketches and stories. I still ride, and (when I’m not in lockdown) volunteer with my local Riding for the Disabled group. So creating this booklet for Equitots Lanarkshire was a real pleasure!

Lee gave me the text and structure she wanted, and I began by sketching this quick layout of the whole booklet.

Clean up is drawing the final line that will be seen in the finished booklet.

Next comes colour! Here are the pages with and without text.

Rachel modelled as Dorothy from The Wizard of Oz at last week’s On Model session. A little different from the last couple of weeks – this time I wasn’t following a model sheet!